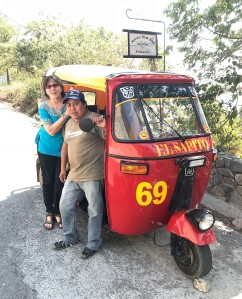 This morning, we were picked up by  tour guide Felipe in his tuk tuk, a small 3-wheel taxi. He was recommended to us by Jennifer, proprietress of Jenna’s River B&B just outside Panajachel on Lake Atitlan in Guatemala.

The road around the lake twists and turns and at times is near the lakefront but mostly high above the water. Steep slopes down to Lake Atitlan have not stopped people from building on what looks like unbuildable land. Offering spectacular views, many of these homes are feats of construction and engineering and some are stunning. Felipe made a couple of stops for vistas, including one that sits atop a house owned by a North American who has built a nice parking spot and platform here for photos. One can see most of the lake from here and from any angle, it’s stunning. Atitlan appears on most lists of ‘top 10 most beautiful lakes in the world’ and was the favorite of travelers and explorers like Aldous Huxley and Alexander von Humboldt. 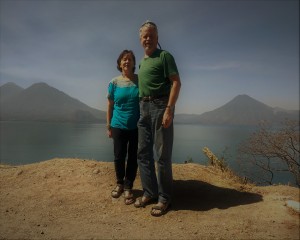 Felipe pointed out the villages and named the volcanoes.  It is mostly indigenous Maya who live around the lake, and several of the towns are known for different crafts. Today we visited two villages to the west of Pana’, Santa Catarina Papolơ and San Antonio Papolơ. Before the arrival of the conquistadors, they were one village of Papolơ, but when evangelized they took saint’s names. San Antonio is famous for beautiful ceramics and we visited three factories. Felipe suggested we see all three before making any purchases. While similar, each group had unique décor, shapes, or designs. Fabrication is the same in all three places, using local clay and molds, the steps from mixing to final firing. The products are either white or a brown base, and they use mostly blues and greens and combinations thereof, the colors of nature. They really are beautiful and would dress up any table with coffee mugs or plates, vases and side dishes. It’s very tempting to buy a lot of stuff at reasonable prices, and they will ship!

I asked the history and learned that it all started about 25 hears ago when someone from the US came here and, finding excellent clay, helped develop the business. Several hundred work in pottery production and sales here in San Antonio, and their wares are seen all over the country in homes, restaurants and galleries.  Employment opportunities are limited in the rural areas, so this is something that not only puts a lot of people to work, but also brings travelers in to visit factories and shop.

Next we visited a weaver workshop – un taller – where I tried my best to work a loom. It is not as simple as it looks, but given time, I think it would have gone faster. At least I looked the part!  There are several co-ops in the community and their textiles are lovely. The local huipile (woman’s traditional blouse) is beautiful shades of deep blue and purple, square necked, and trimmed in brighter colored threads.  In these smaller towns, the women mostly still dress as they have for generations, with the huipile, a corte, belt, and headdress. The corte is a piece of fabric about 2 meters, one circular piece that you step into, then fold to your size and tie with a belt. The headdress is usually a long scarf secured with a tie, going around the head a couple of times. Finally another long scarf is worn over the shoulder. The traje (outfit) is as much function as fashion. A corte can last and fit for years, there is no letting out or taking in, you just adjust the folds.  Many of the huipiles have a seam in the front, which can be opened for breast feeding. The long scarf can be tied to carry some groceries or even a baby. They’ve been wearing this same costume for generations; the only difference today is there is usually a cell phone tucked in the belt.

We finished our tour at lunch at Hotel Villa Catarina. A lovely spot with beautiful grounds, a swimming pool, and open-air restaurant. Felipe told us about life today. He is a self-employed guide and tuk-tukyero, his wife works at one of the larger hotels in Panajachel and is going to university in the evenings to earn a law degree. His 15-year-old daughter is studying to become a teacher of special needs kids, knowing sign language and braille. The 14-year-old wants to be a veterinarian. The other three are still young but all active in school.

Touring in the tuk tuk is so easy – they can park anywhere and getting in and out takes no time at all. Felipe was a great example of the entrepreneur in Guate’. We learned more than anticipated and made a new friend.