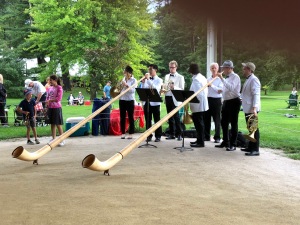 I’ve known of the music venue and festival of Tanglewood for years, seen it on TV, and finally this year, got to visit. If you don’t know it, Tanglewood is the summer home of the Boston Pops and a summer academy for aspiring young music students from around the world. You’ve probably seen a performance on PBS and are familiar with the famous conductor John Williams, or if of a certain age, you may remember Arthur Fiedler.

So we drove from the easternmost part of Massachusetts, Orleans on Cape Cod, to Lenox, on the western border with New York.  We had tickets for Tanglewood on Parade yesterday, which is towards the end of the student program and included the Pops in addition to the 200 or so aspiring musicians.  From 2 pm till 8 pm there were several short performances showcasing the students, a percussion performance in Ozawa Hall, a string quartet on the porch of Tappan Hall, a horn group playing fanfares at the entry.  One surprising site was a small group playing Alpenhorns, the long horns seen in Switzerland.

The performance area is known as the Shed, which is a covered but open-air auditorium with fantastic acoustics. You can buy seats in the Shed or just camp out on the lawns, with speakers and big screens. The gates opened at 2 pm and there was quite a line when we arrived, with fans carrying lawn chairs and picnic coolers. Several large trees offer shade on the lawn and we set up under one with our lawn chairs, blankets, cooler, and a bag of books. Around us were a party of 4 at a card table playing games; two couples had a table set up with flowers, candles, and a bottle of prosecco; a young family set up an area and played games; and many were eating a picnic.

The main performance was sublime. Pieces included Tchaikovsky, Ravel, and Gershwin, with different conductors, and John Williams conducting some of his own music, well known pieces from the Star Wars movies. I felt the Ravel Daphnis et Chloé, Suite No. 2 was the best as it really seemed to showcase each of the different instruments in the orchestra. Others in my group liked Rhapsody in Blue, and I must admit, the featured pianist, Kirill Gerstein, was outstanding. (just a few days ago I spent an hour on hold with United Airlines and heard Rhapsody over and over.) However, it was really a thrill to see John Williams, age 86, performing the Star Wars music from the new films, with the familiar theme coming in now and again. Who knows how many more times he will do that. 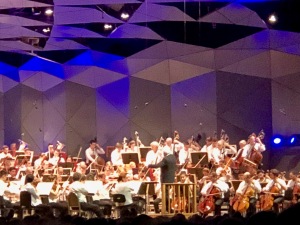 The Tanglewood campus is lovely. About 300 acres with stunning views of the Berkshire Mountains. It’s a most generous venue, with tickets at affordable prices (we paid $34 for seats in the back of the Shed), where you can bring your own food and beverages. Several small restaurants and a beer garden offered options. Parking is free. The place is well organized, and grounds are beautifully maintained. We’ll go back next year and probably the Parade performance again. How can you resist an outdoor concert that ends with the 1812 Overture accompanied by fireworks!